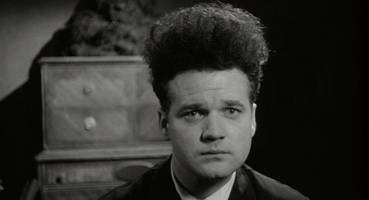 Henry Spencer (Jack Nance (1977), Danny Lloyd (1987)) is a vacationing printer who lives alone in a small apartment. He is married to Mary X and is the father and murderer of the Baby.

Henry's most distinctive trait is his trademark haircut and his constantly forlorn face. He is almost always seen wearing a plain suit and tie.

He always gives off an air of being nervous or anxious, as well as depressed. He is very quiet, speaking very little throughout the movie despite appearing on screen for a generous amount of time. Most of his lines are very brief quips and sentences. He is polite and well-mannered which can probably be attributed to his timid nature. His personality obviously has a hidden darkside, as he had no problem commiting infidelity and he suddenly stabs the Baby.

His environment says a lot about his personality as well. He appears to enjoy music as he keeps a record player in his apartment as well as piles of dirt, worms, and a picture of a nuclear explosion.

Community content is available under CC-BY-SA unless otherwise noted.
Advertisement